Sintered Stone vs Quartz: Which Kitchen Countertop is Best?

I recently visited a couple of kitchen countertop material suppliers to find out the differences between sintered stone and quartz. While many of you already know what quartz is, sintered stone is a newer material that has surfaced in the interior design scene lately. 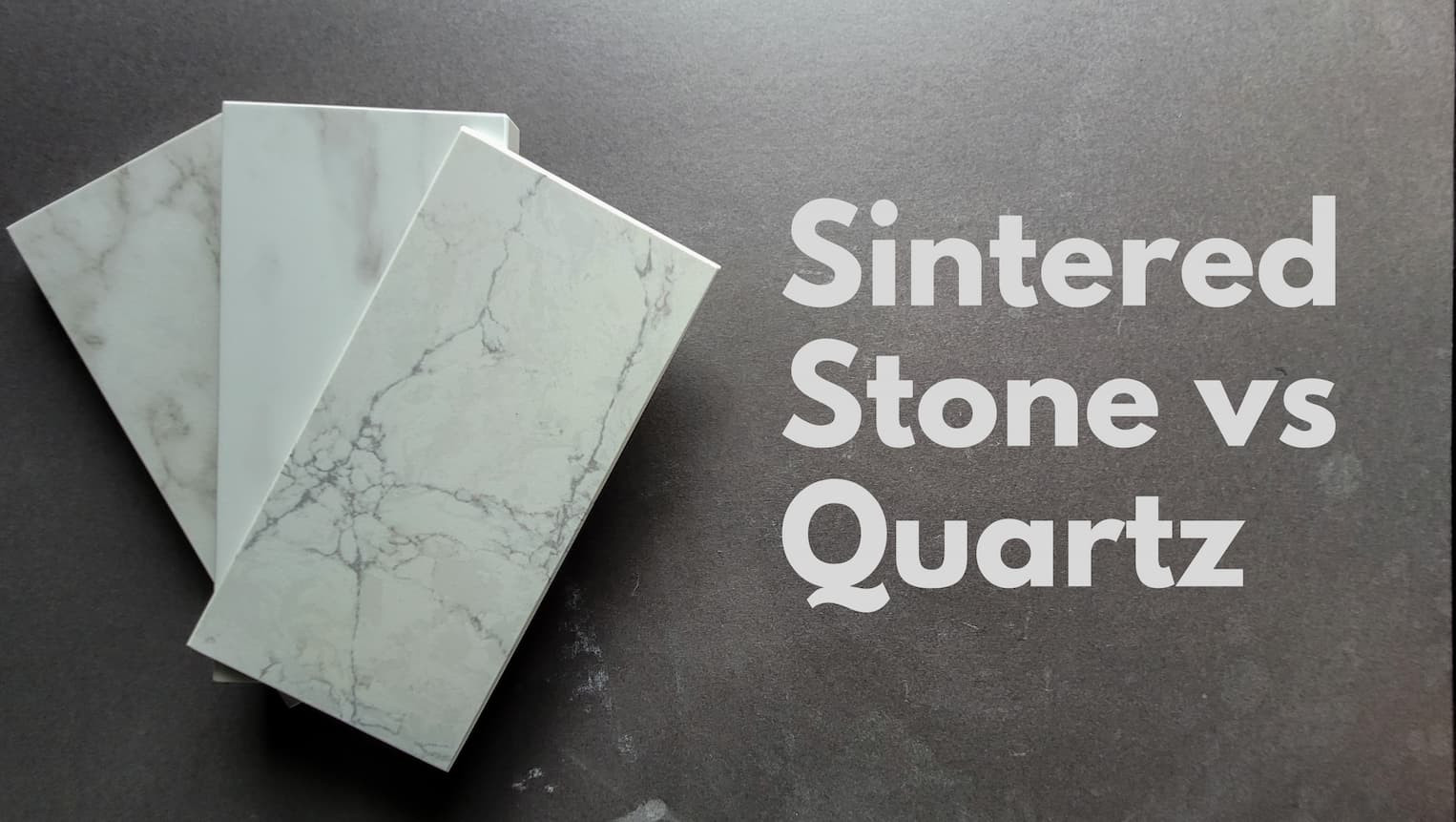 Purportedly the successor of quartz and made with newer technologies, this man-made material is fast gaining popularity for its durability. In this article, I list down the key differences between the two materials and put a few sintered stone and quartz samples to some rigorous stain-, heat- and scratch-test to see how they hold up.

What are the main differences between sintered stone and quartz?

Composition: While the composition differs from brand to brand, sintered stone surfaces essentially comprise natural quartz stone as well as minerals and raw materials commonly used to make porcelain and glass surfaces. These are then fused together at a very high temperature. Quartz, on the other hand, is a blend of natural quartz stone, resins and other pigments, compacted together under intense vibration and pressure.

Appearance: Sintered stone uses a digital imaging technology to achieve the pattern on the surface material. The appearance of, for instance marble grains can therefore look more realistic and natural on sintered stone surfaces compared to those on quartz.

Quartz however is full body, which means the pattern travels through the slab. So if you are opting for a thicker slab, you mean be able to see the pattern running through from the side of the countertop. Sintered stone’s pattern is just visible from the top surface. 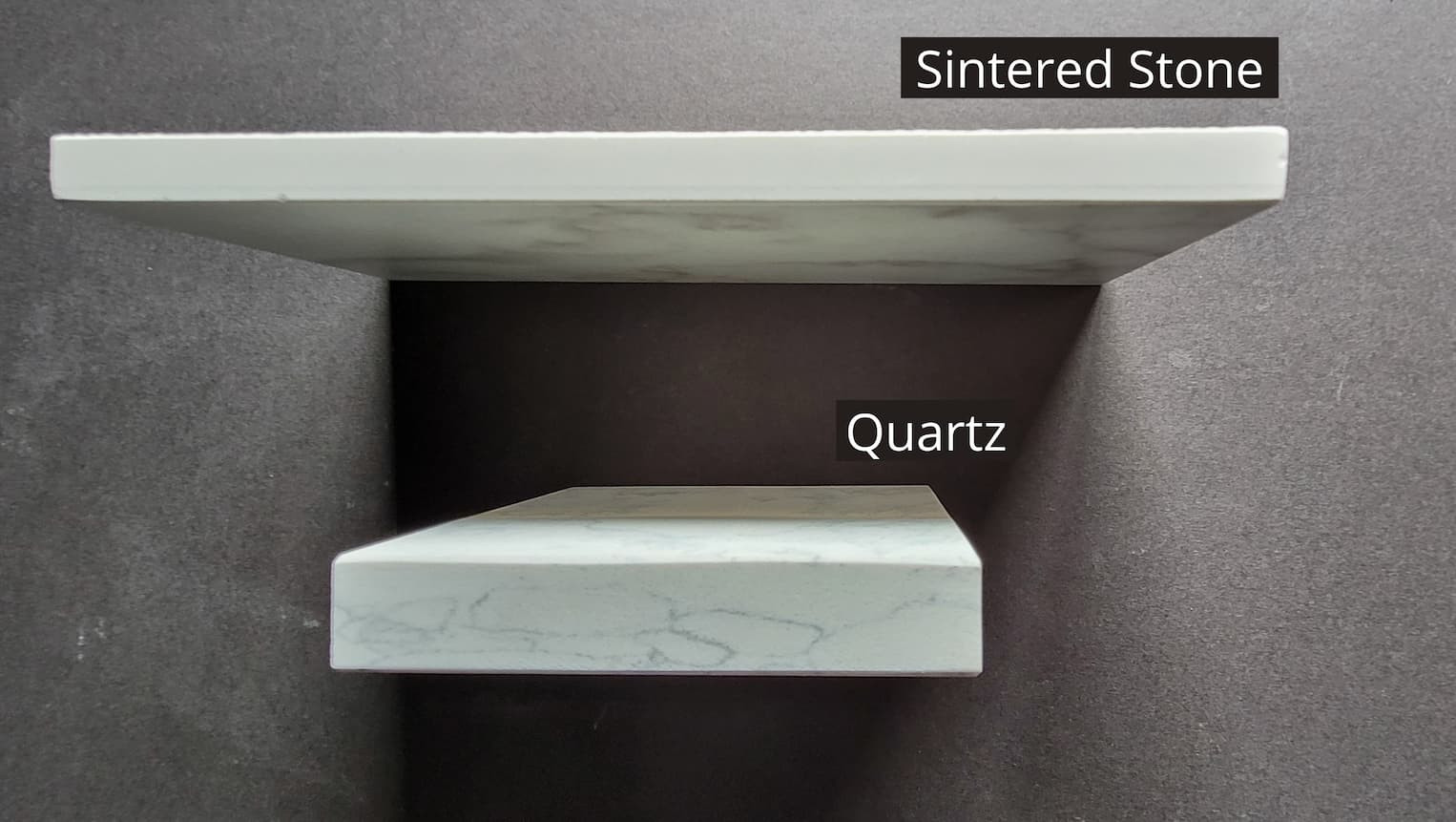 Side perspectives. Sintered stone versus quartz: notice the grains at the side of the quartz sample.

Yellowing under the sun: According to a supplier, quartz surfaces will discolour and turn yellow (if it’s white) or greyish (if it's a darker colour) when left exposed to direct sunlight for a long period of time e.g. 6 months. This is because of quartz’s high resin content. In contrast, sintered stone is unlikely to have any discolouration during the same period. As such, the latter is suitable for outdoor use.

Cost: Across the brands, premium quartz colours have a similar price range to sintered stone, which is about $230 psf. There are however lower-end quartz designs that can go for around $90 psf.

Putting sintered stone and quartz samples to a scratch-, stain- and heat-test 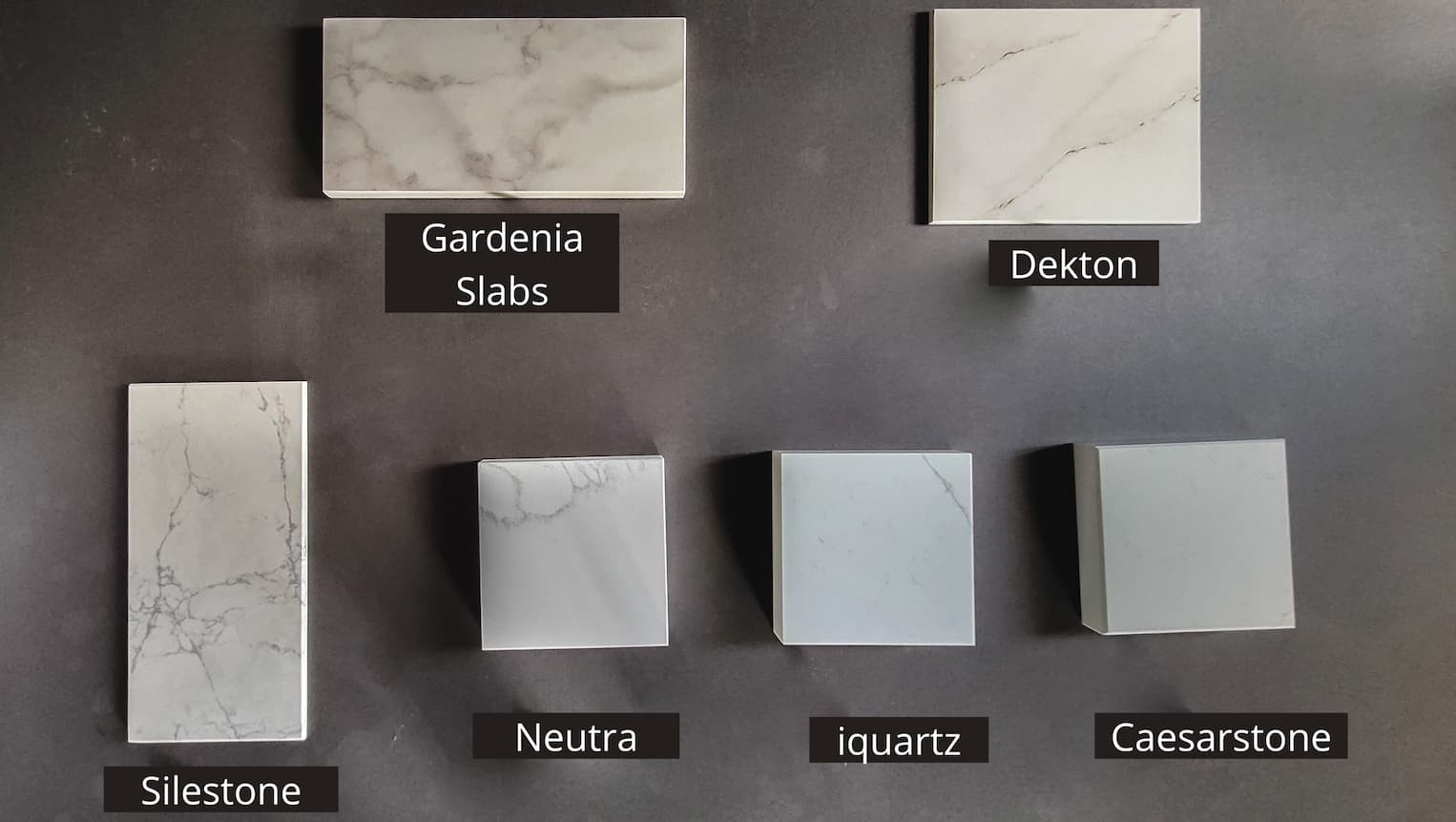 To learn the differences between the scratch-, stain- and heat-resistant qualities of both sintered stone and quartz, we also put them through several tests.

What samples did we use?

I went with marble-inspired sintered stone and quartz samples for consistency and also because of their popularity with homeowners in Singapore. The colour codes are in brackets. These were the ones I tested with:

Scratch test: I ran a knife through the surface samples a couple of times, mimicking the action of slicing and chopping.

Stain test: Splotches of pasta sauce and turmeric paste were left on the samples for two hours to see if these would cause any staining. The splotches were then washed away with dishwashing liquid and water. 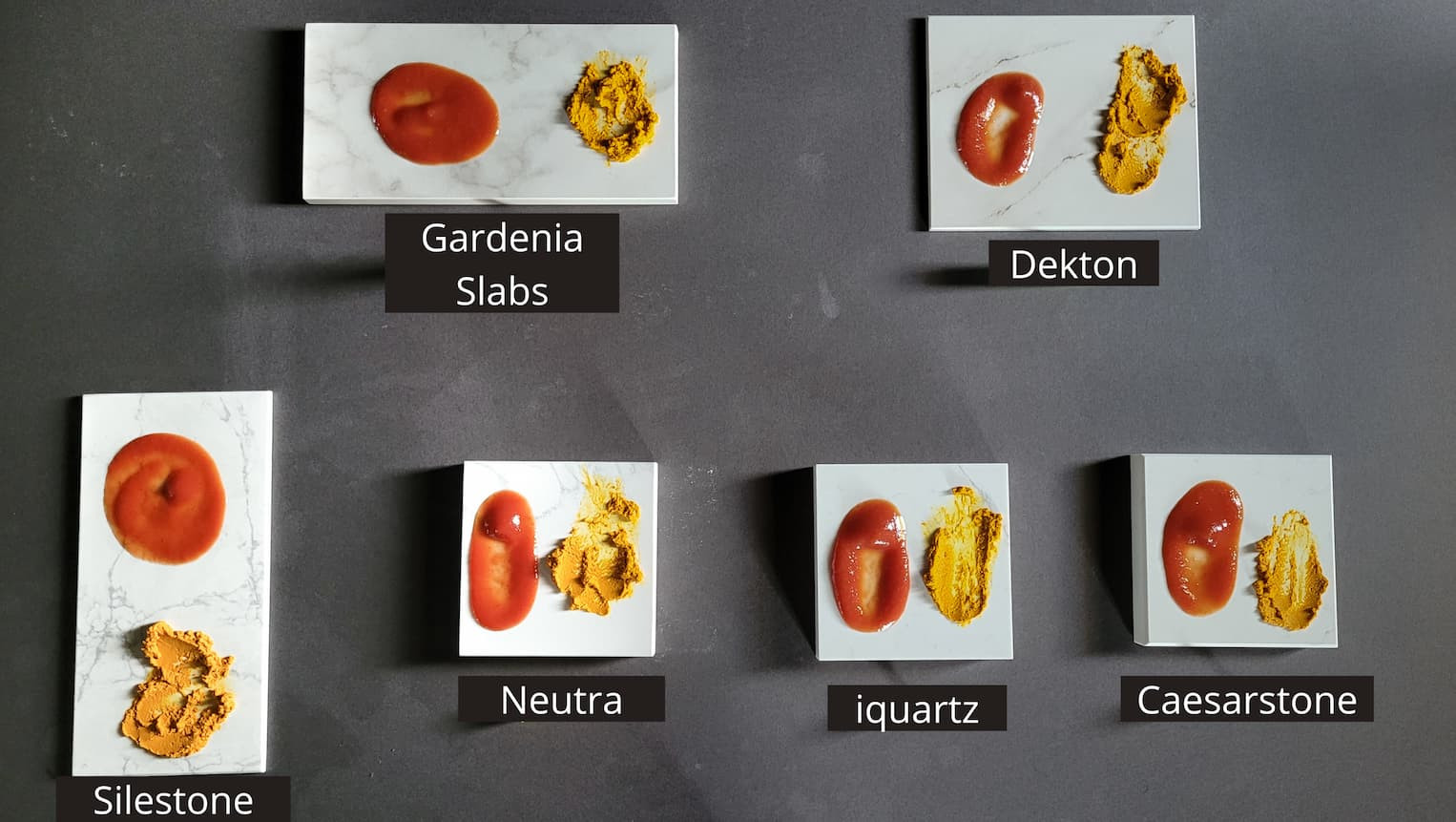 Will the pasta sauce and turmeric stain the surface samples?

Heat test: A pot of boiling water (100 deg C) was left on each surface sample for 5 mins.

Scratch test on the iquartz sample.

Scratch test on the Dekton sample.

This is where things got interesting. All the quartz samples were stained with turmeric after two hours, even with much scrubbing. Silestone followed by Caesarstone had the faintest turmeric stain left behind, while Neutra had the worst.

Stains came off very easily for both the sintered stone samples (Dekton and Gardenia Slabs), even without soap. 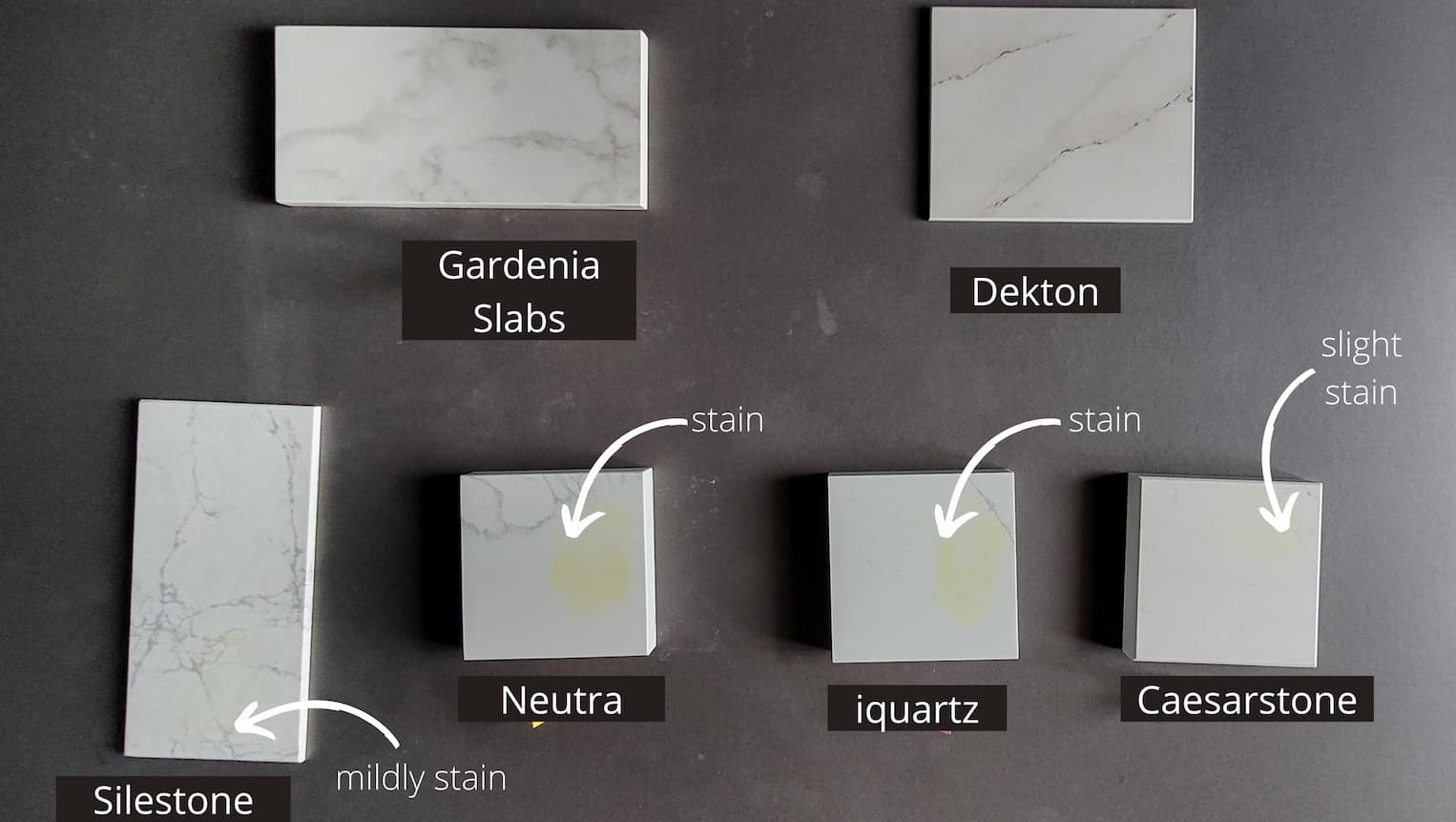 The results of the stain test. 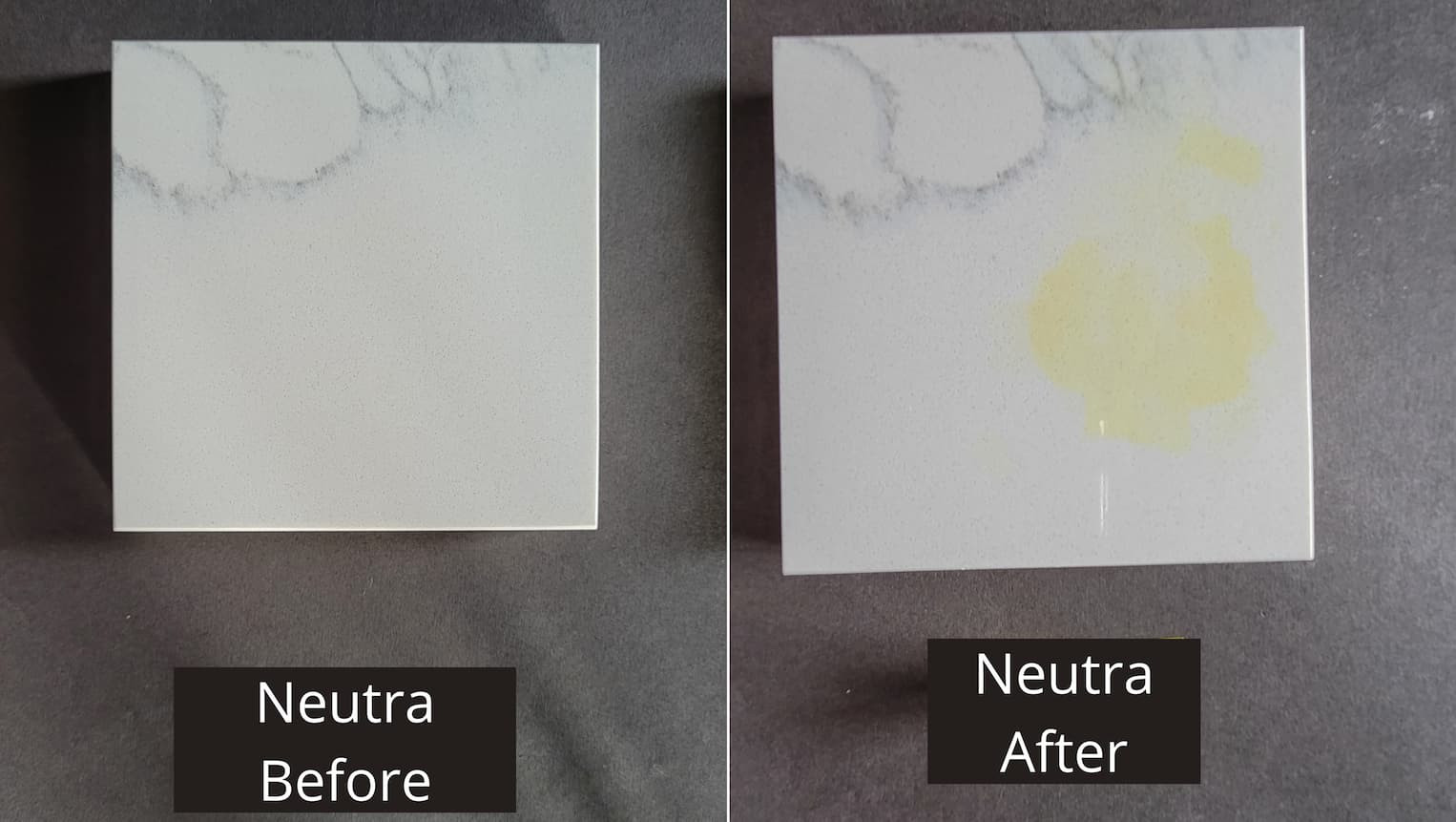 Neutra Quartz Before and After. 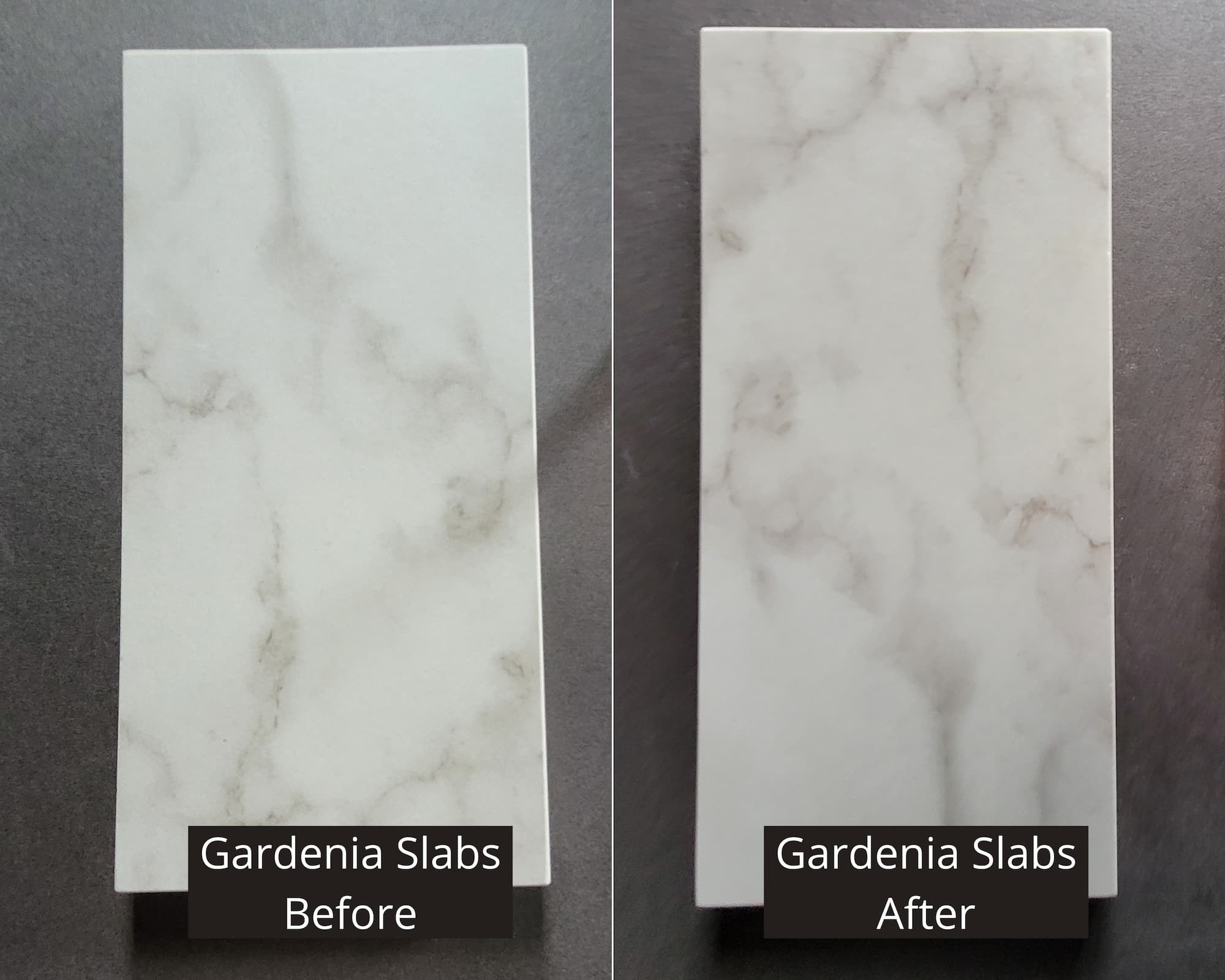 Gardenia Slabs (Sintered Stone) Before and After. 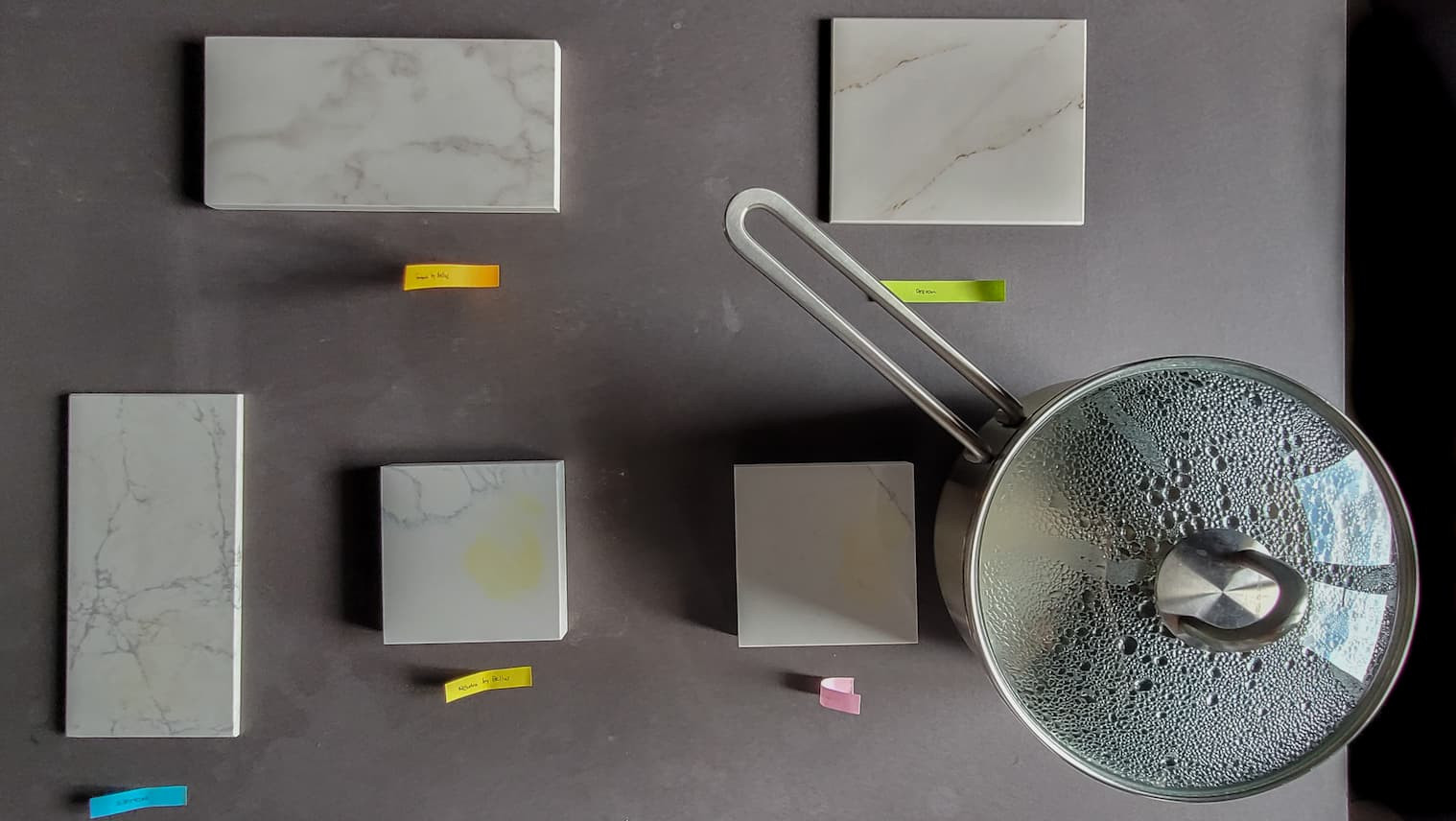 I placed a pot of boiling water on each sample for 5 mins.

There were no scruff or burnt marks on any of the surface samples. They all held up to the 100 deg C test well.

From what I’ve learnt about sintered stone as well as the tests that I've put them through, it would seem that they are indeed an improvement from quartz, with better durability and more stain resistance.

I also preferred the more natural appearance of the sintered stone surfaces compared to quartz (for their marble series), although Silestone also has a wide range of quartz surfaces that feature very realistic looking marble grains.

Folks who are particular with the sides of their countertops may wish to note that sintered stone surfaces come with plain sides so the top design doesn’t follow through to their cross section of each slab. This isn't a very huge issue, as you can always opt for a double-profile installation, which joins two pieces of slabs together so that there is a thicker edge by the side. This allows both pieces to feature the top design.

In terms of price, quartz takes the cake as sintered stone surfaces are usually priced alongside the premium quartz range.

Questions on sintered stone or quartz? Hit us up on social media: 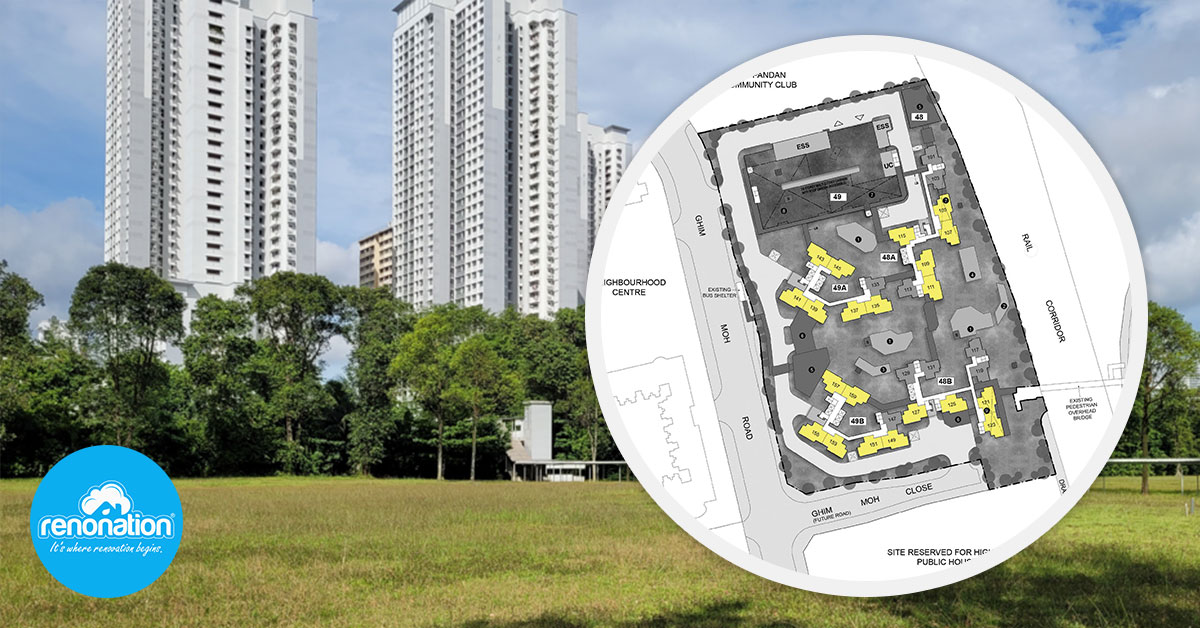 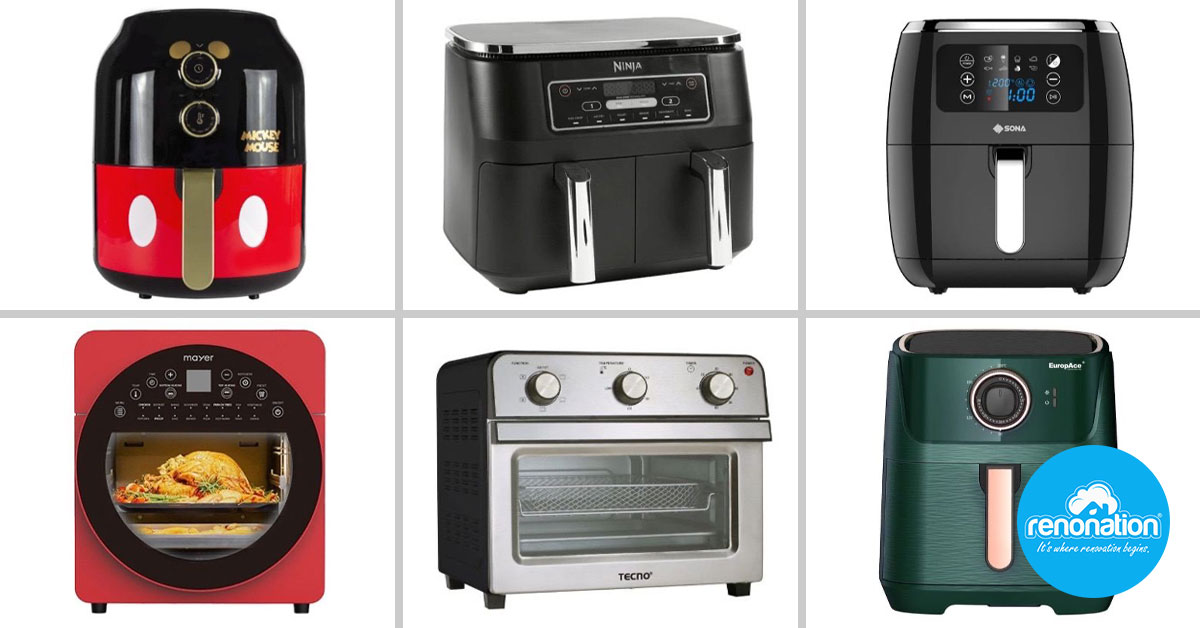 Design: Ofthebox Many air fryer fans have insisted that the air fryer is a game-changer in their kitchen, allowing them to prepare dinner in minutes and enjo... 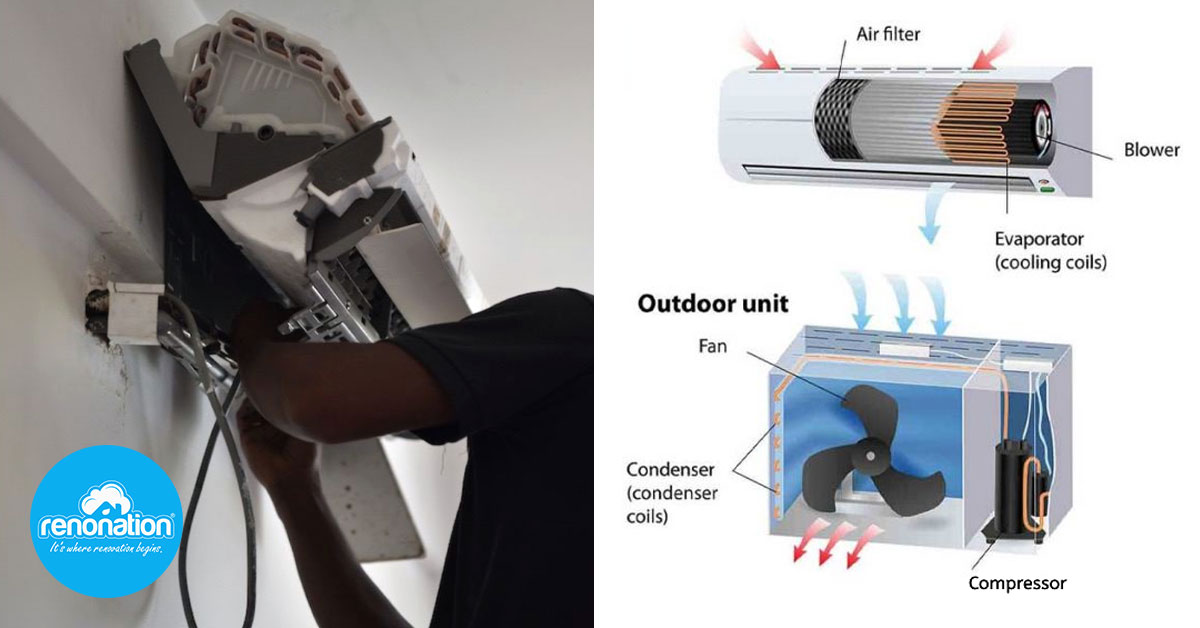 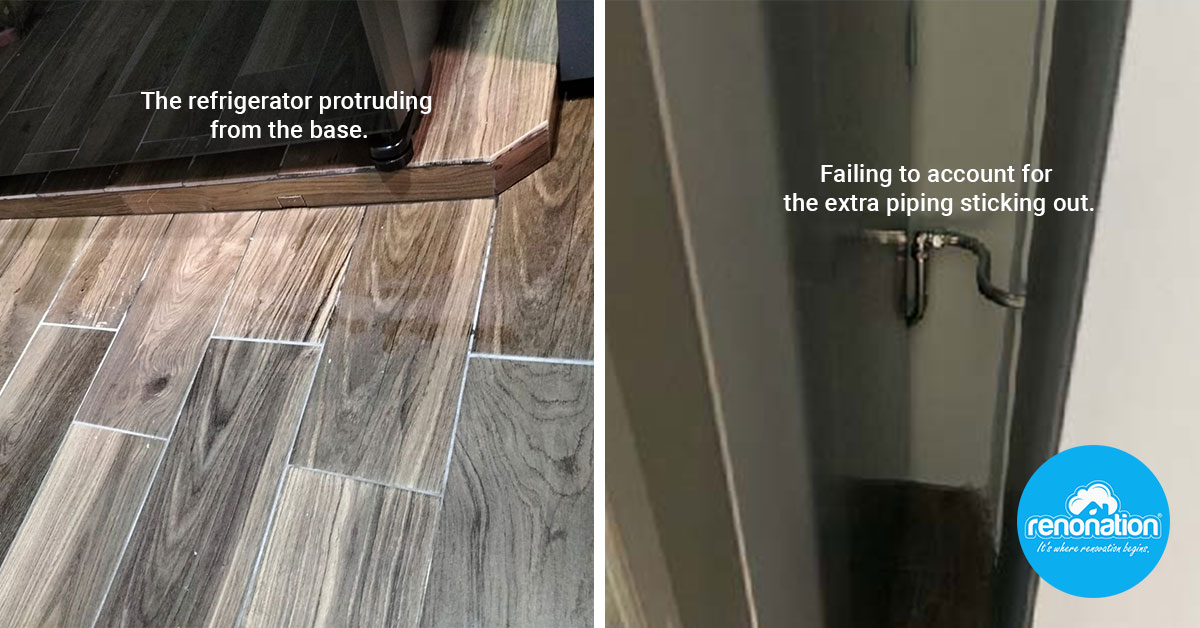