Home Tour: A Burnt HDB Flat in Toa Payoh Gets a New Lease of Life

It was an electrical short circuit in the living room that caused the fire, possibly due to the age of this 5-room HDB flat. The fire eventually spread to the rest of the 30-year apartment, razing the family home to an unrecognisable state. Thankfully, no one was at home when it happened. 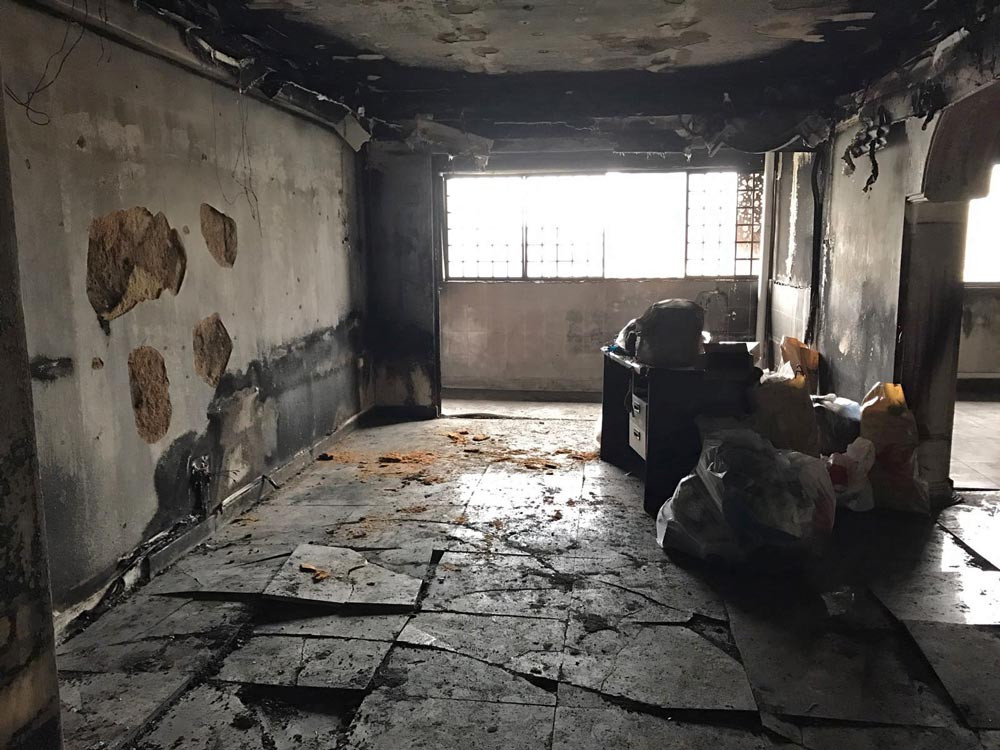 A short circuit in the living room leads a fire to break out in this flat.

Filled with despair yet determined to rebuild their home, the family of five, comprising an elderly couple with their three adult sons, went on a hunt to search for an interior designer who could take on this massive undertaking. After visiting numerous interior designers, they eventually settled on Dave Chew from ID Gallery. The affable designer was not only experienced, he was also HDB trained and certified, which gave the family the assurance that he was going to be able to handle this difficult task.

The state of the home was worse than Dave had thought, but he was quick to assess the situation, methodically finding solutions to the problems. He first discovered that most of the wall plastering were destroyed by the fire. To ensure the stability and sturdiness of the walls, he decided to rebuild most of them from scratch, first removing the loose concrete and debris, then re-screeding them before re-plastering them again. 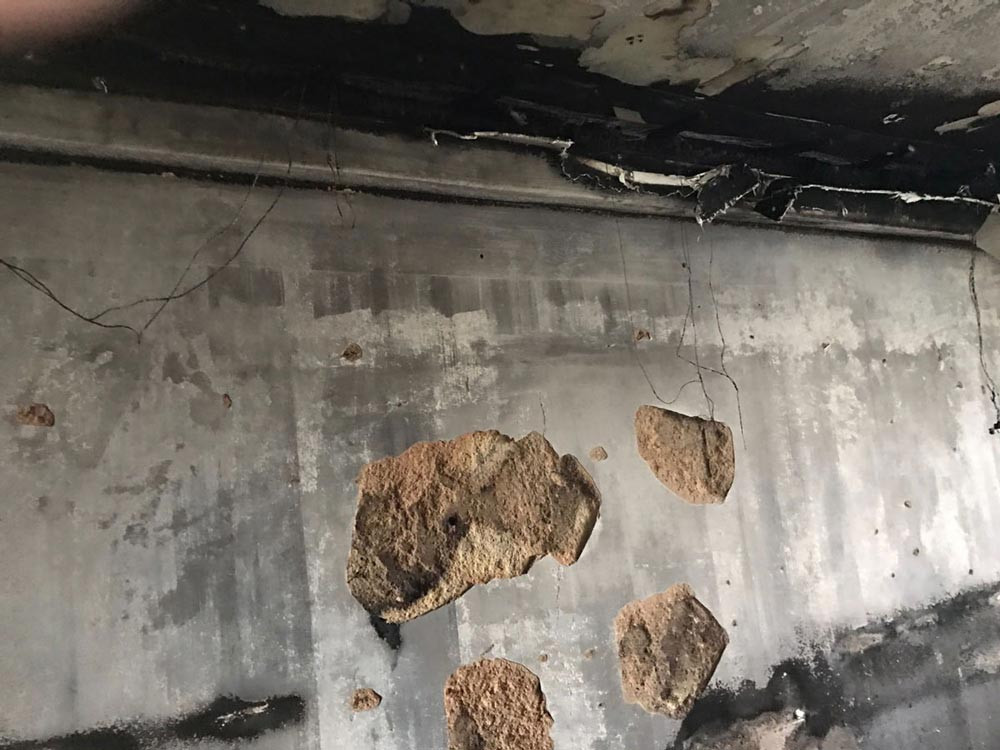 Most of the walls were destroyed in the fire. 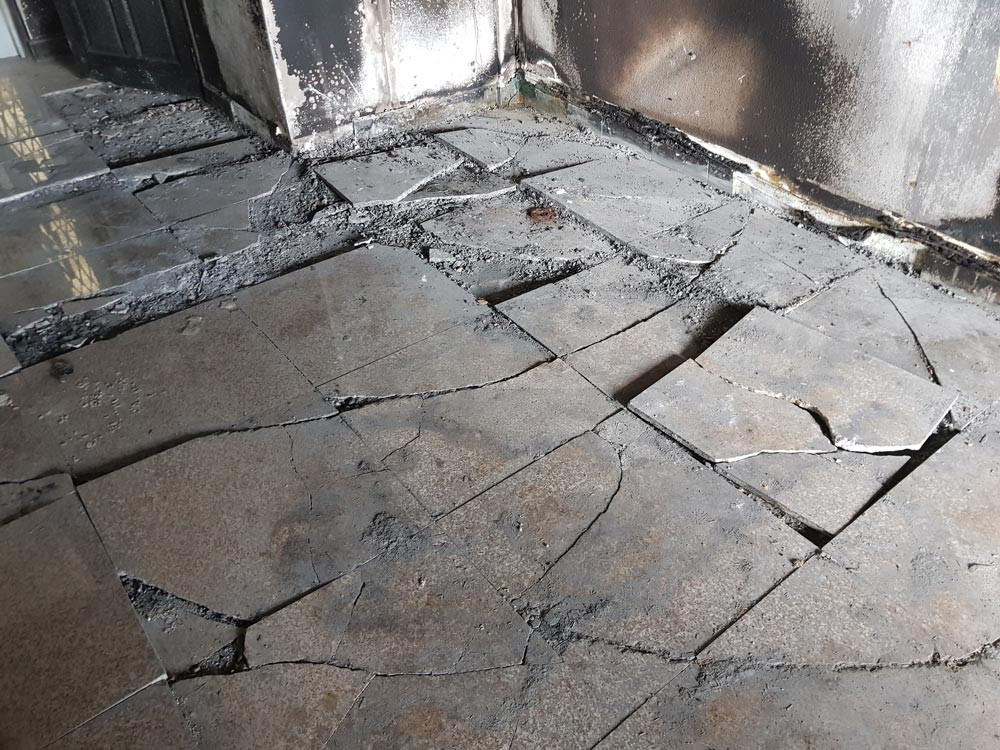 The flooring was similarly damaged.

Electricity was also a problem. As the home’s fire was caused by an electrical issue, SP Services wanted to make sure the current was stable enough throughout the renovations. As such, the designer and his team had to use industrial 3-pin plugs when they carried out any work requiring electricity. This enabled a connection at a higher current compared to conventional household plugs, helping to prevent another short circuit from happening. Licensed Electricity Workers (LEWs) were also employed to do up the electrical wiring for the home. 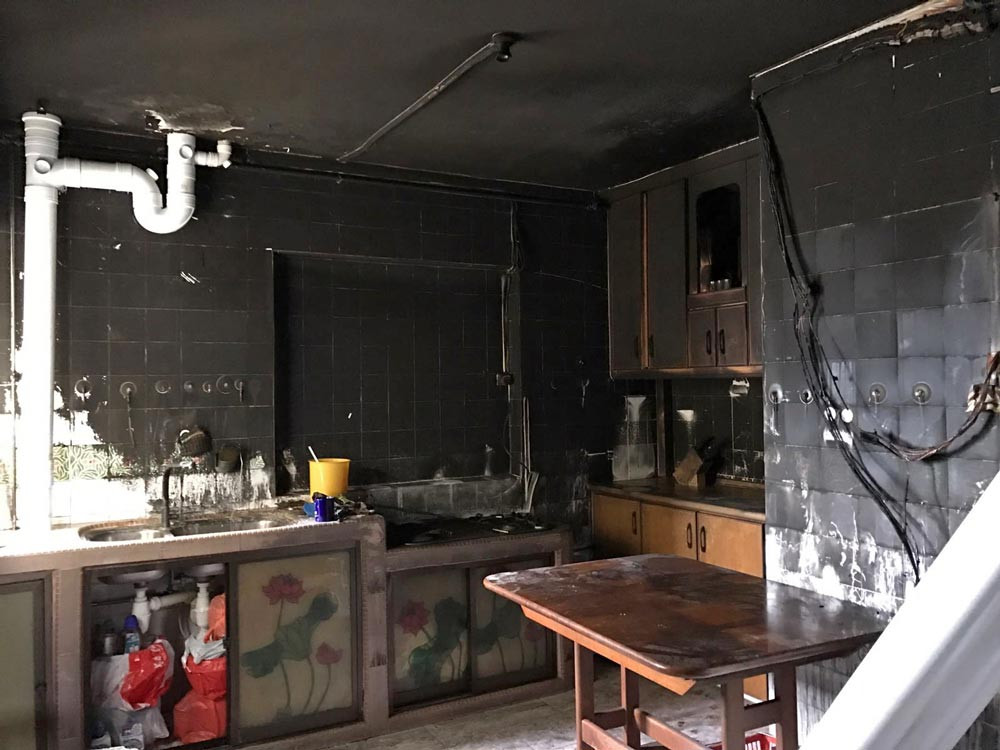 The state of the kitchen after the fire. 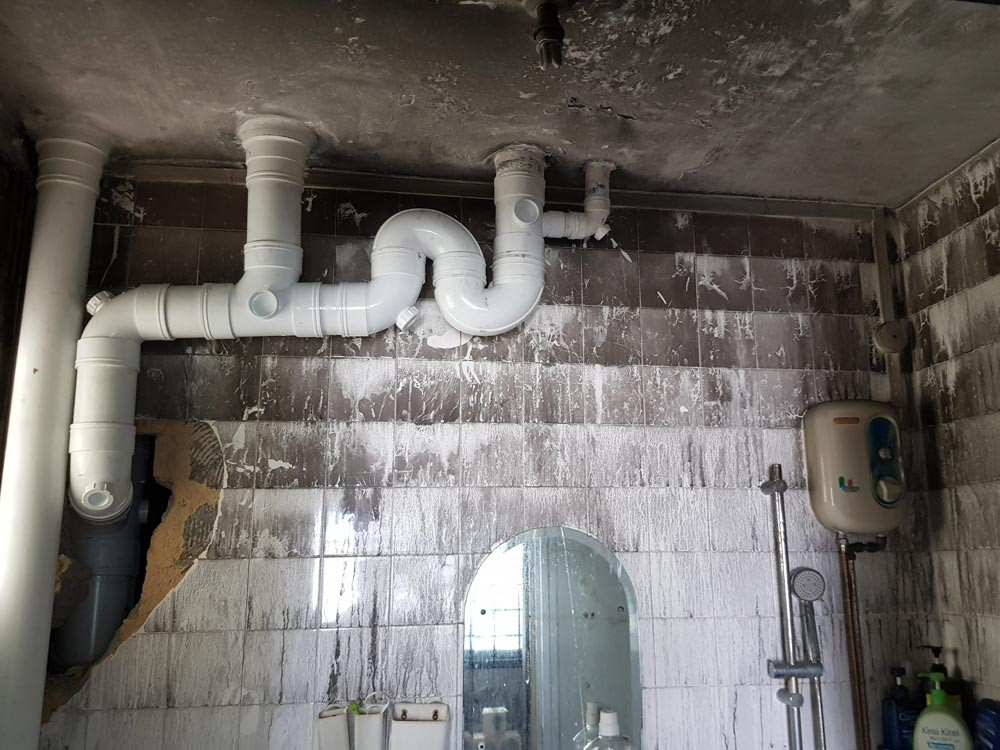 The bathroom wasn't spared either.

The entire home also needed to be washed and cleaned thoroughly to remove the thick black soot that were covering the surfaces. To effectively do so, Dave decided to use a machine that released a high density spray of water, not unlike those used in a car wash facility. But the difficulty didn’t just lie in removing the soot, it was also in preventing the water from seeping through into the unit below. “We had to cover the floors with plastic sheets to make sure excess water didn’t stay on the floor. And while cleaning the floors, we had to keep removing water—didn’t want to leave them for too long or the water would seep through,” recounted Dave. 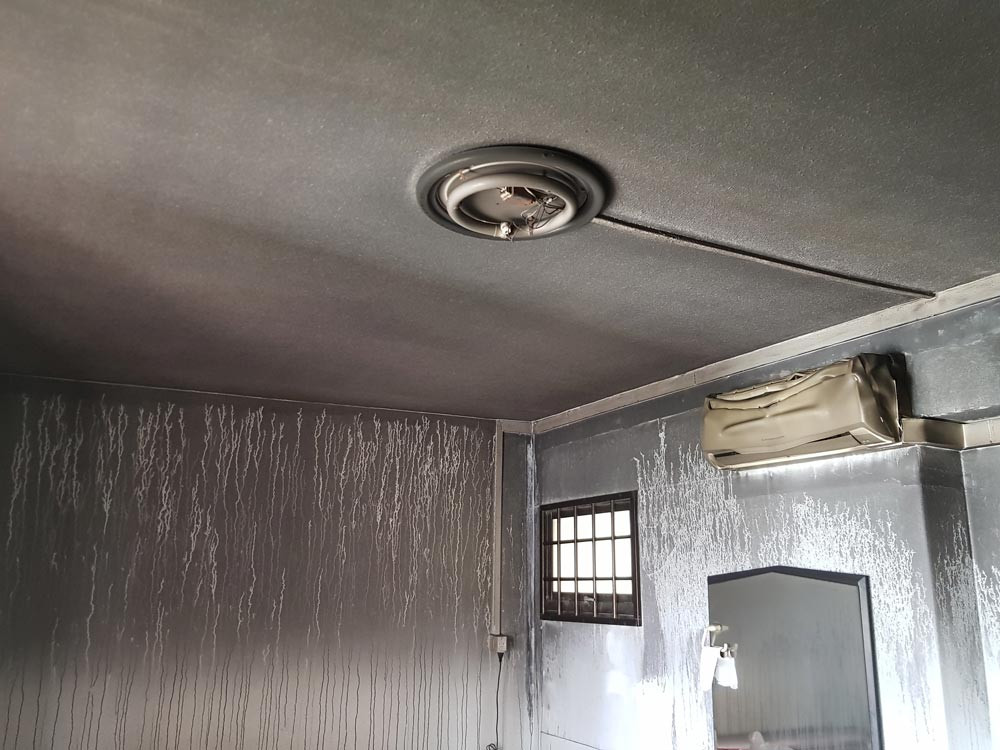 The home was covered in black soot that could only be removed by a high density spray. 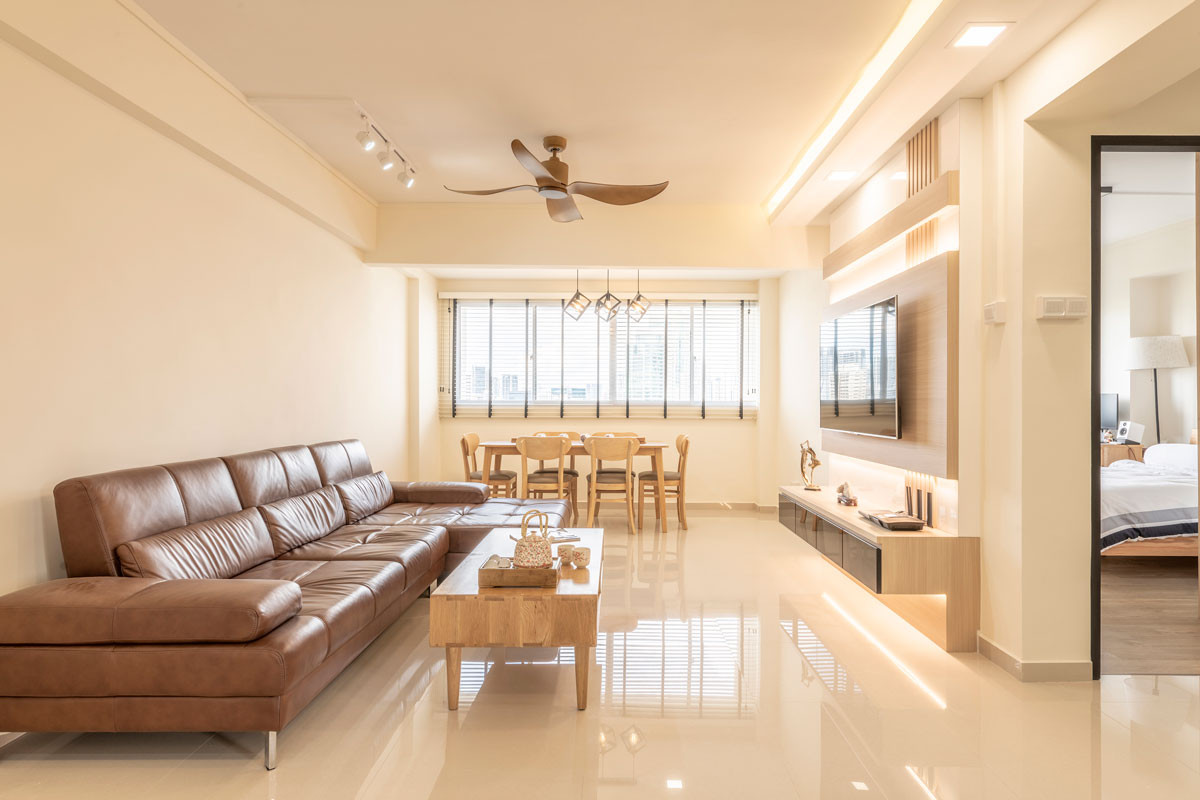 Worlds Apart: The home came together with a modern theme and touches of Scandinavian and industrial.

The cleaning itself took a week, with the rest of the renovation and design spanning over three months. Dave, based on the brief from the family, went for a cosy modern theme with Scandinavian and industrial touches. They didn’t want a lot of details, so the designer kept things simple. A consistent palette of wood and white were employed, giving the home a warm and bright milieu. The kitchen, originally closed off from the other communal areas, was given an open concept for more ventilation and flow. Even though the family cooks often, they tend to avoid deep frying, which allowed the open plan to work. One of the rooms, previously a study, was also converted to a bedroom. 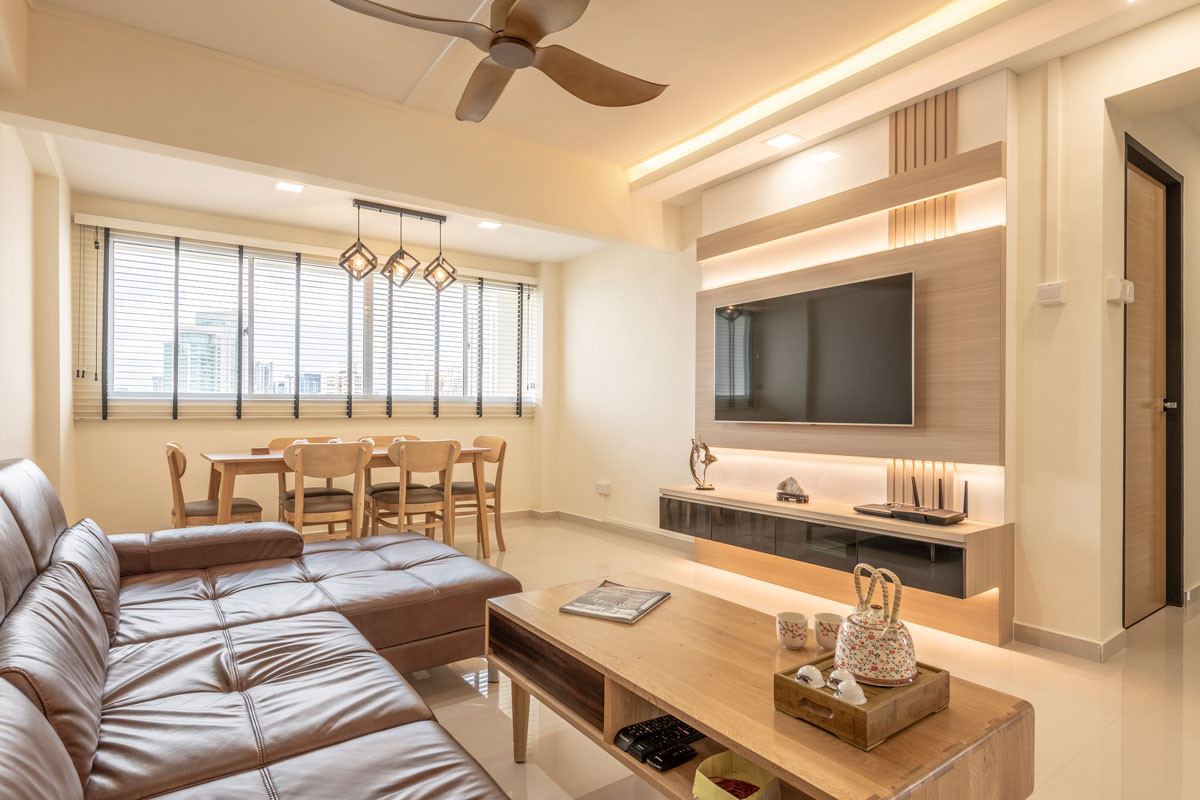 Cove lights were used to create a cosy ambience in this apartment. Industrial-style pendants hang above the dining area, providing a contrast to the clean and sleek space. 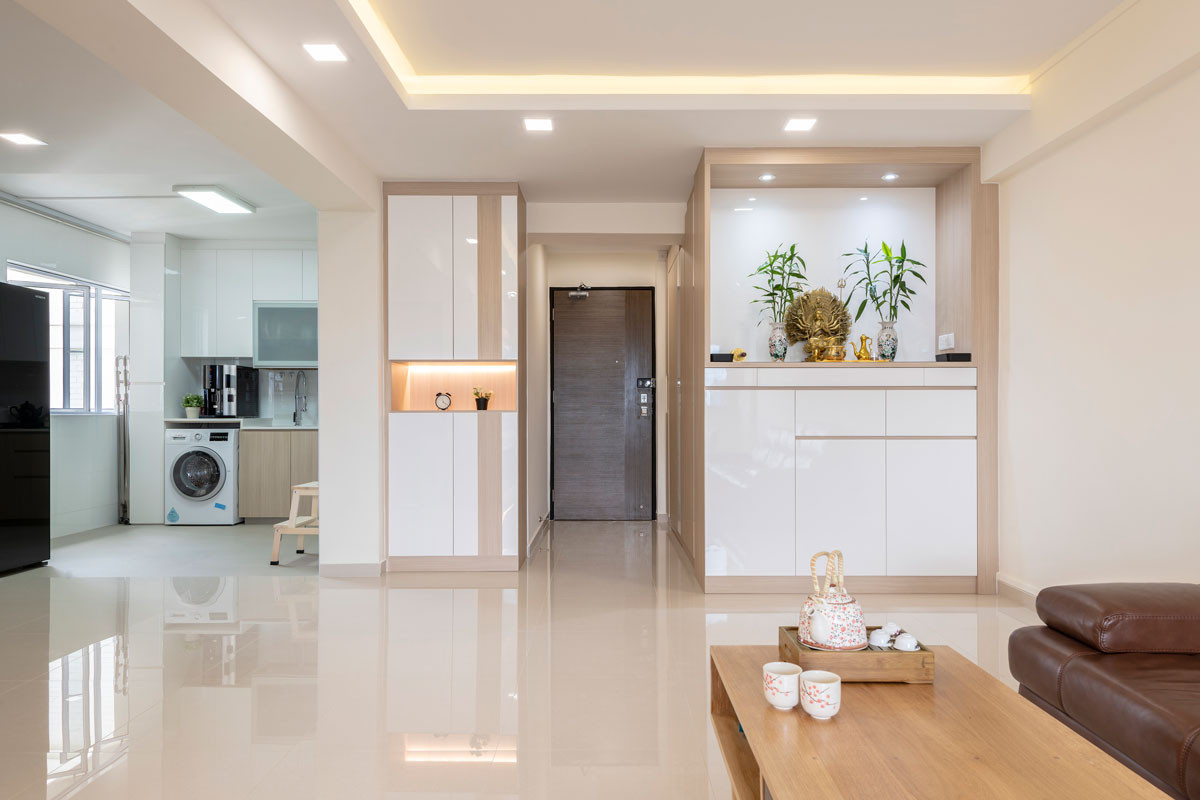 A modern altar was designed to fit in with the look from the rest of the home. The kitchen was made open, to create a better flow to the rest of the communal areas of the flat. 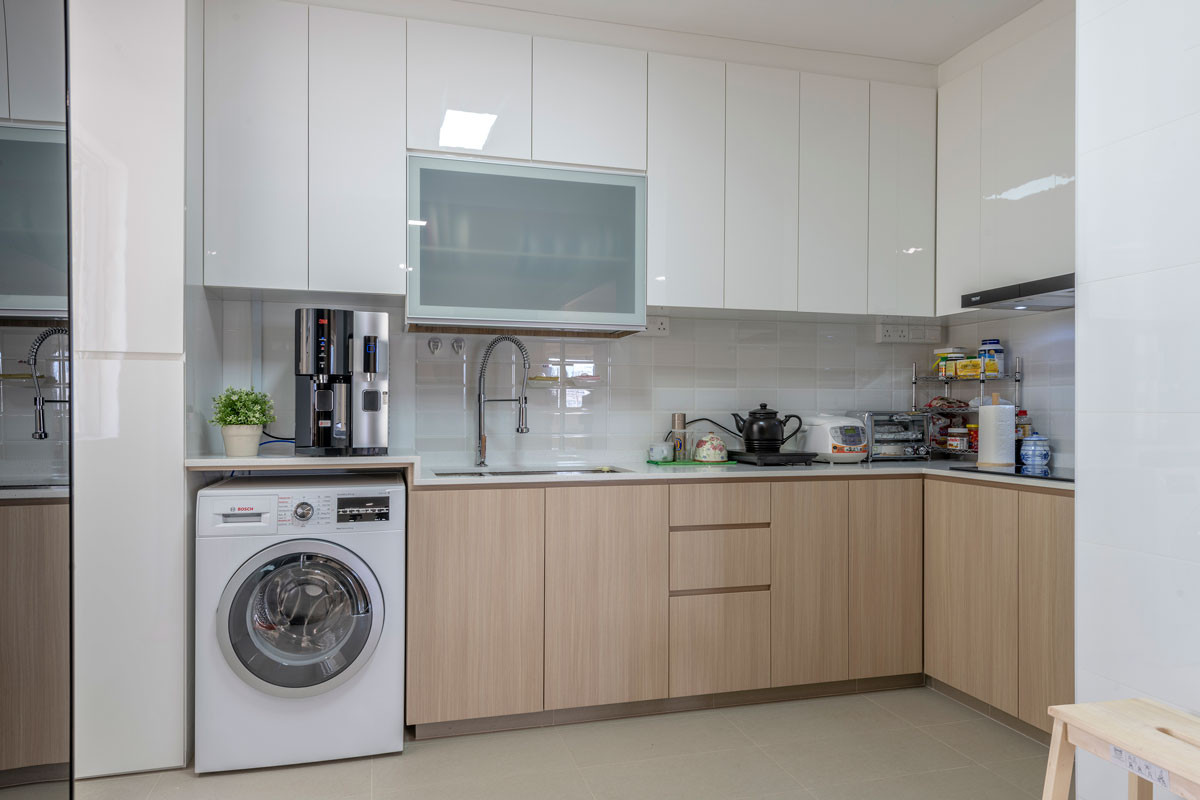 The kitchen rebuilt. Quartz counters sit on laminated cabinets with the upper cabinets given a white, glossy appearance and the bottom cabinets swathed in woodgrain laminates. A duo-tone look was chosen for interest and to create the sense of a taller ceiling. 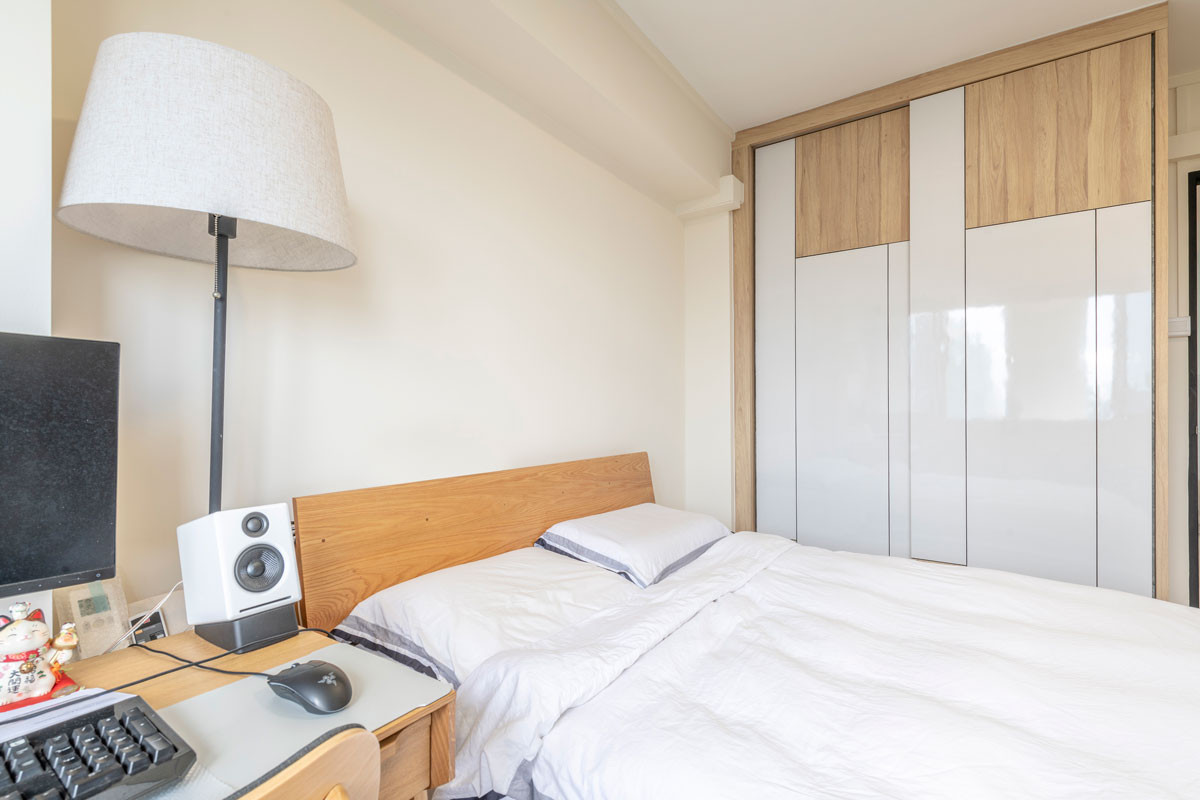 The bedrooms take on a similar theme with wood features and whitewashed walls. 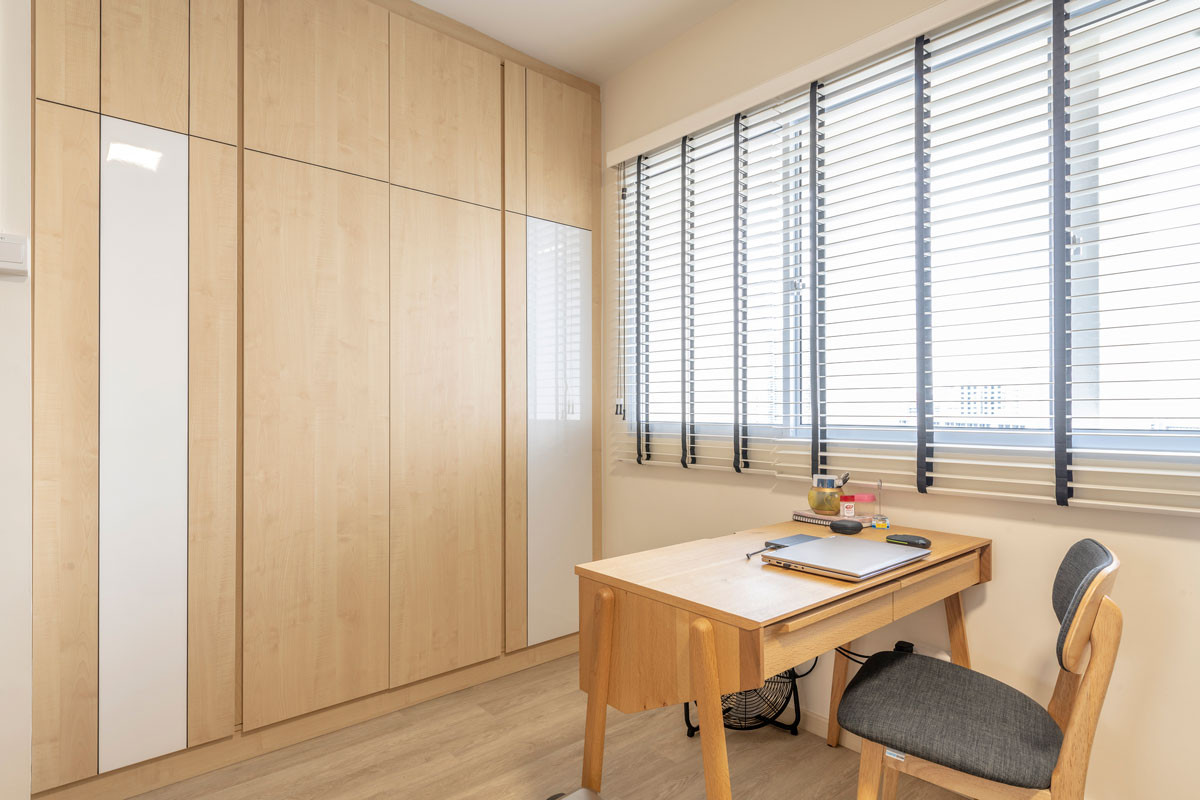 A compact study area was incorporated into one of the bedrooms.

Homogeneous tiles were chosen for the bathroom walls. Textured stone-like tiles were used for the common bathroom while the master en-suite was clad in warm-toned marble-like tiles for a spa-like quality.

As the weeks went by, the home eventually started coming together, much to the relief of the homeowners. The blackened state made way for a light and breezy space that evoked a very different feel, even from the original look of the flat which tended to look a bit dark. It signalled a new beginning for the family, who wanted to put the incident behind them as they moved back home, to a place that was somewhat familiar yet new in many ways. All photos courtesy of ID Gallery 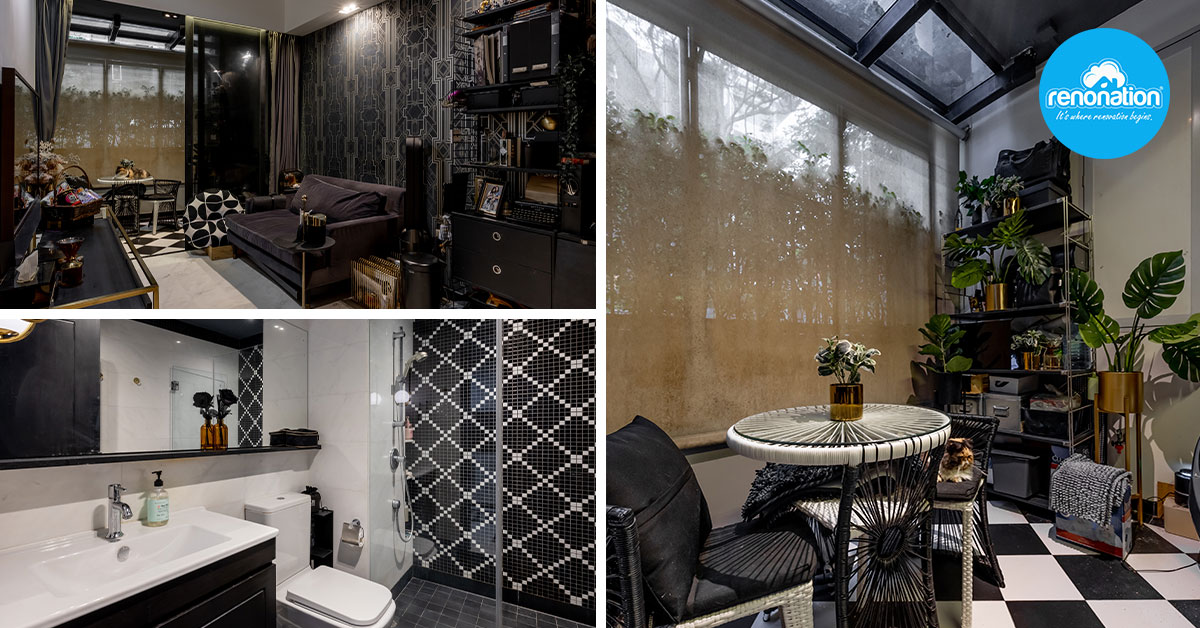 While homes in Singapore tend to embrace the light wood-accented, bright and airy feel, this couple’s 1-bedroom + 1-study condo along Sophia Road went in the op... 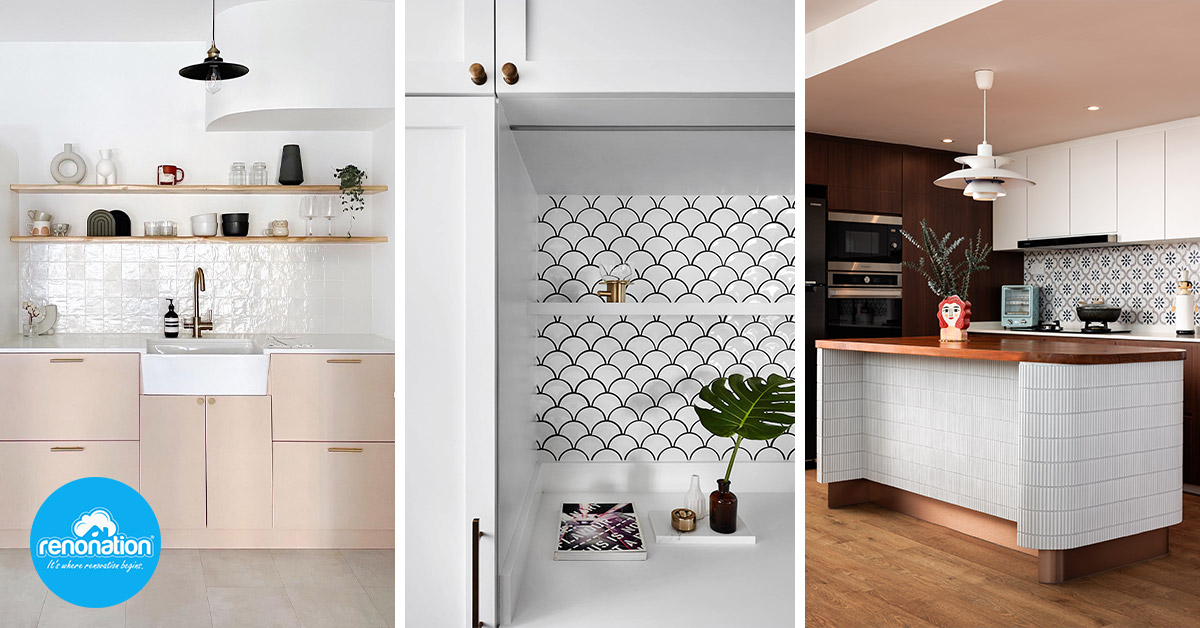 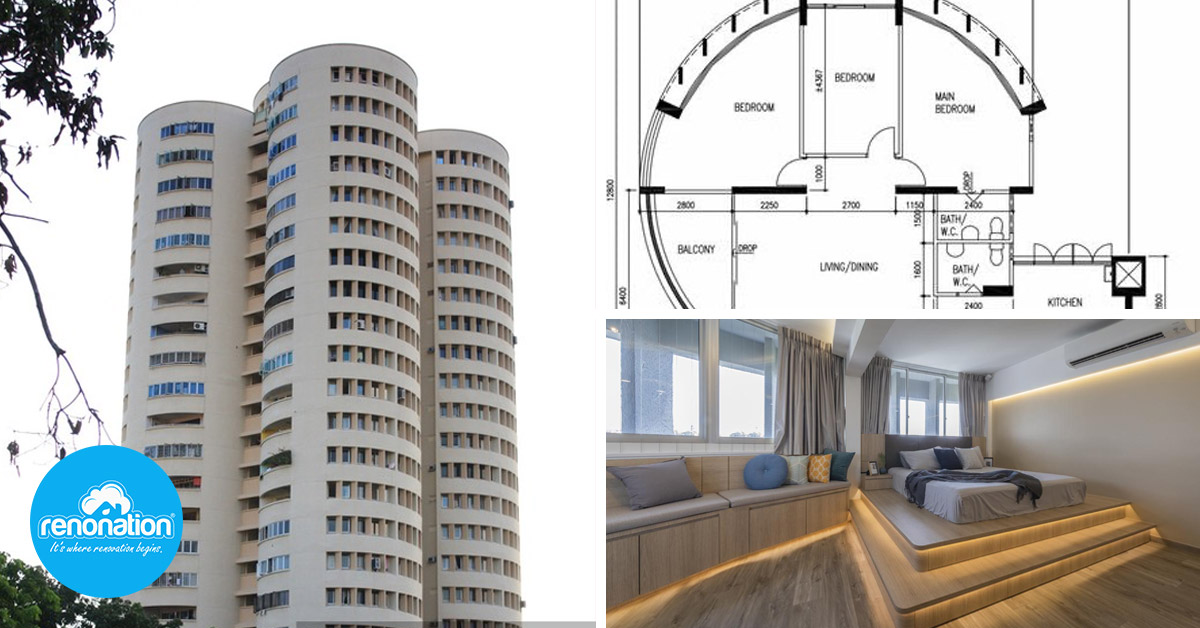 Take a Rare Peek Inside 6 HDB Flats with Unique Layouts

Have you ever wondered what the interior of an unusual HDB flat, blessed with a rather unique layout, looks like? What are some renovation design considerations... 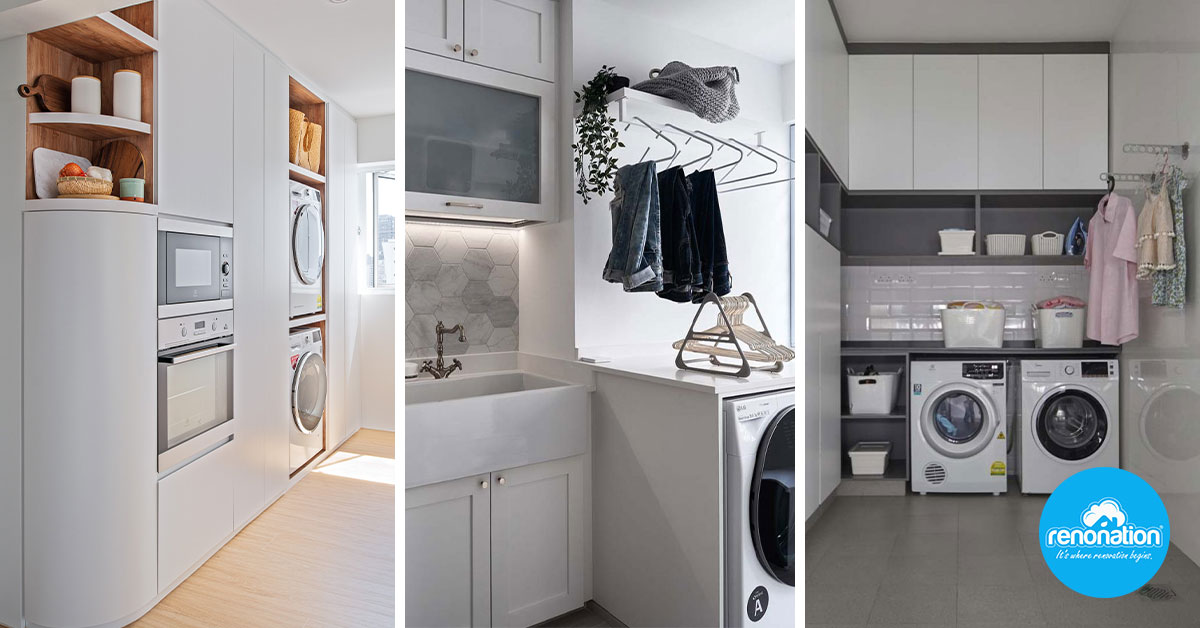 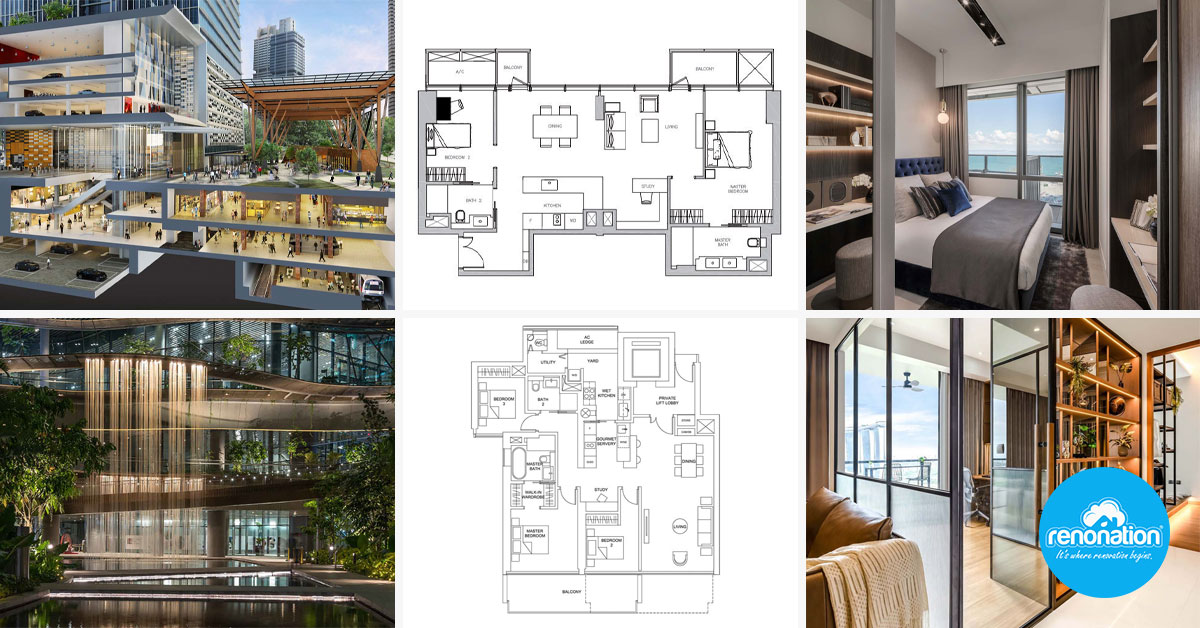